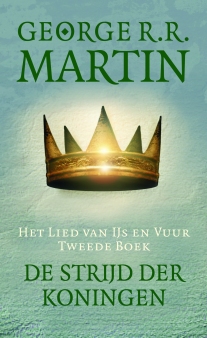 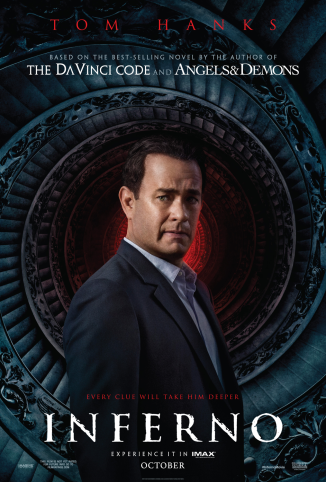 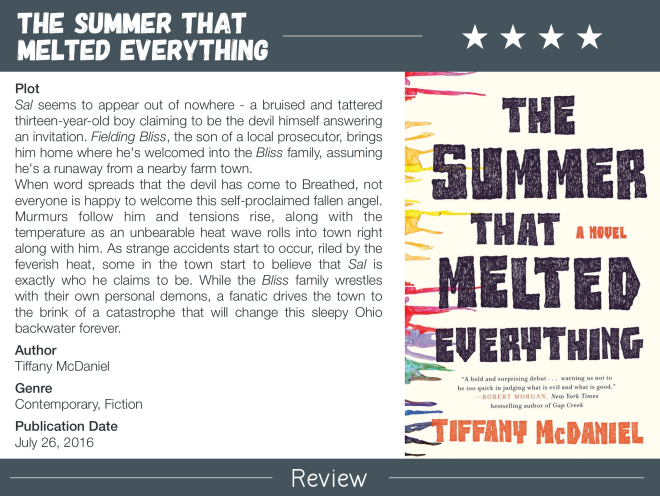 The Summer That Melted Everything sees the devil invited to a little town called Breathed. What ensues are a series of strange accidents, an unsettling heat and questions about whether a small boy could really be who he claims to be.
Author Tiffany McDaniel was very kind to offer me an eARC of her debut novel. This, however, in no way influences my review. The book comes out tomorrow, July 26 in the US, and I encourage you to give it a try. There’s also a short interview with Tiffany McDaniel at the end of this review.

The story is actually kind of simple. The devil, depicted as a little boy, comes to a little town and its inhabitants get anxious when bad things start to happen. It’s a simple scenario, but it’s way more complex than that. This story revolves a lot about how people react to being near the devil. It’s interesting to see how they gradually turn against him, even though it’s just a little boy.

END_OF_DOCUMENT_TOKEN_TO_BE_REPLACED

Kindred Spirits was released in celebration of World Book Day, which I honestly had never heard of, where every year there are a few authors who write a short story that’s being sold in order to promote this day and reading in general.
I quickly want to thank Kat from Life and Other Disasters, since I won a copy of this book as part of her 3 years of blogging giveaway.

My first thoughts were: “A story about being a fan of Star Wars? I’m in.”
I hadn’t yet read a contemporary novel or even a YA one, so this one was a first in both cases. With this being a short story, you can’t really expect it to have a grand story that has a lot of elements to it. Still, Rainbow Rowell delivers a fun story that keeps you interested while not requiring a lot of thought. It’s a story that could have just as easily happen to me in real life, which made it very enjoying to read.

END_OF_DOCUMENT_TOKEN_TO_BE_REPLACED 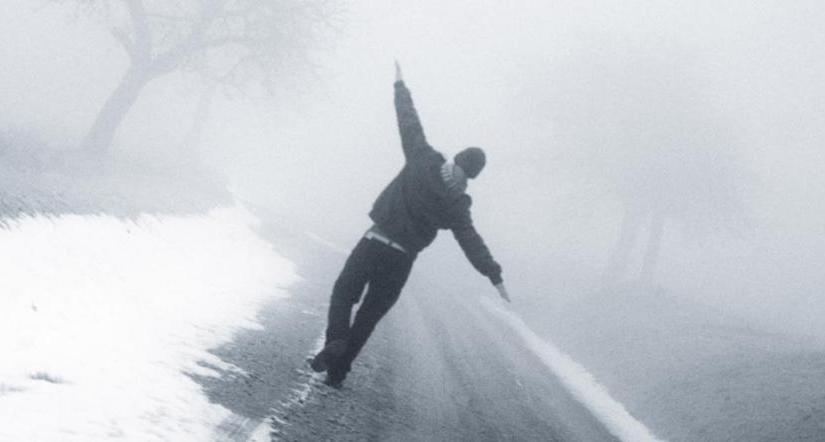 Orbiting Jupiter by Gary D. Schmidt, a supposedly heartbreaking story about two boys who end up looking for the daughter of one of them. I must admit, I didn’t know what to expect from this one. I’ve read a lot of positive, like really emotionally positive, reviews about this book, so I thought I’d give this one a go. Now I probably have to disappoint some of you by saying that this wasn’t the best book I’ve read.

END_OF_DOCUMENT_TOKEN_TO_BE_REPLACED

I finally finished my first book of 2016 and it took me long enough. I can blame it on my exams, but it’s probably also due to my lack of motivation. However, this had nothing to do with The Girl on the Train, because I enjoyed it. It wasn’t really that thrilling, but it was still quite interesting to read.

At first I didn’t really like Rachel or I couldn’t relate to her. I didn’t know whether I should’ve been supportive of her or not. Though after a while I started to have empathy for her. She’s troubled and had her fair share of difficult moments, which led to her not making the right decisions. She appeared to be desperate a lot of the time. This made her more human and realistic. I did like the interactions between Rachel and Scott. I don’t really know why, but perhaps it’s because they were both troubled and having a hard time while finding comfort with each other.

END_OF_DOCUMENT_TOKEN_TO_BE_REPLACED

There are probably a lot of reviews about this book, but I still wanted to do one since I loved it and hated it at the same time. Sure it’s a great and epic read with great characters and unexpected events, but it did have it’s flaws.

When you get into this book, you’re introduced to a whole new world. For the most part it’s comparable to our own world, but it has it’s differences. At first it may be kind of difficult to keep all the various families or houses apart from each other (you can consult the index at the end of the book, but I found that a bit tedious to do) and the fact that the names in this book aren’t really normal doesn’t help either. Eventually it gets easier to recognise each different character and it’s more simple to follow the different storylines. Due to the rather large amount of different storylines to follow, George R.R. Martin has divided the chapters by character. This means that in one chapter we’re following a certain character and in the next chapter it changes to another character. (Just so you know, it changes between 8 different characters) I think that’s a good way to keep things interested, but when you’re just occasionally reading a few chapters at a time it can get quite confusing. You do get to know the motivation every character has for a certain thing they do and you get to experience some events through the eyes of multiple characters and get different sides of the story.